Nyxt on Windows 10 (with WSLg)

Well, this happened… and so far it’s seamless, though very experimental. 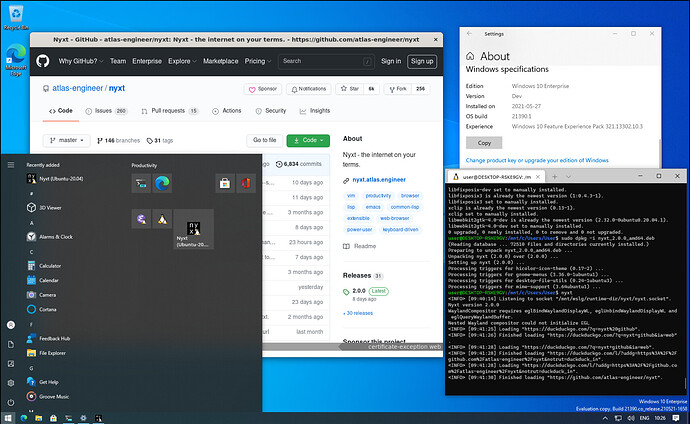 Using the dev channel of Windows 10 with WSLg (WSL 2 with the graphical update) and WSL Ubuntu 20.04. I installed the .deb, a few package dependencies, and explicitly added the Nyxt icon to the Start menu. Windows itself is running in a virtual machine, as the Windows 10 dev branch is not stable. I look forward to doing more Nyxt on Windows 10, as WSLg it comes out of dev, into beta, and release later this year as part of the Windows 10 Sun Valley update.

Once WSLg was running, the commands I used were:

Wow, that’s cool! I’ve been trying to do the same, with no luck so far (differences are: I use plain WSL2, without the graphical update, and I am quite unfamilliar with Windows). WSLg seems to solve lots of problems

That’s really cool! Thank you for sharing and providing the instructions as well! Maybe when the new version of Windows 10 is pushed to users, we could update the readme! ヽ(^。^)丿

Glad you enjoyed seeing it! It boggles my mind. I will be staying on top of the dev and insider channels, and plan to use Nyxt more as part of my daily workflow. I would love to contribute to Nyxt am happy to write or assist with the steps in the documentation when the time comes. For now I’ll keep this thread updated as WSLg progresses.